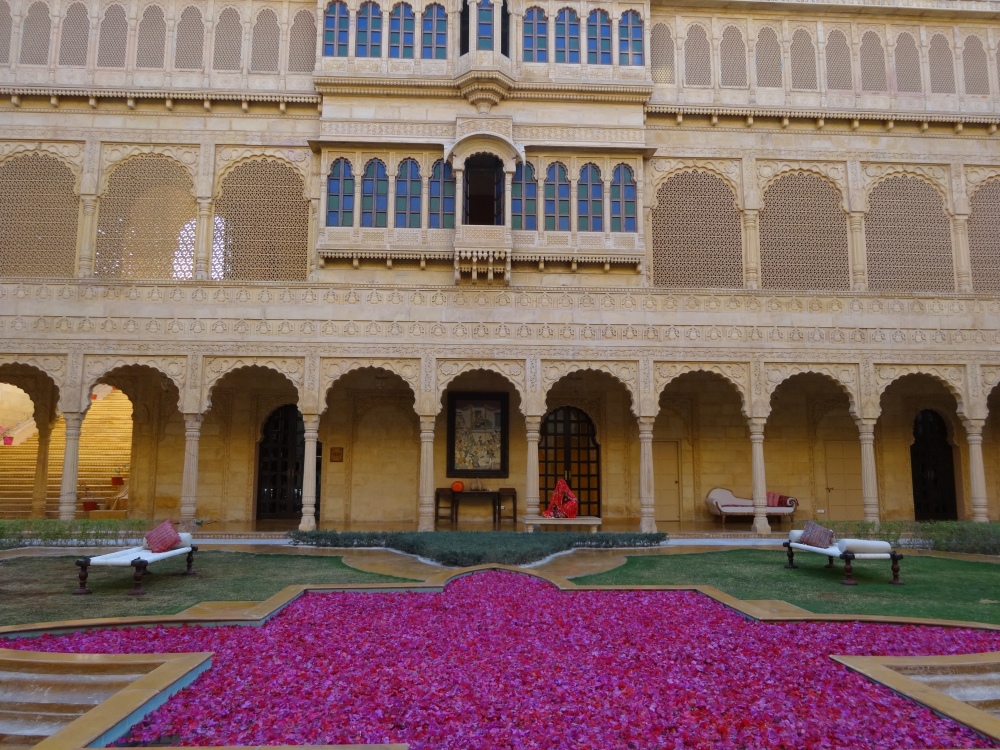 Nicknamed “The Golden city”, is a city in the Indian state of Rajasthan, located 575 km away from the state capital Jaipur  and around 5 hours from Khimsar .Once known as Jaisalmer state it is a World Heritage Site. The town stands on a ridge of yellowish sandstone, and is crowned by the ancient Jaisalmer Fort. Jaisalmer is named after the maharawal, Jaisal Singh, a Rajput king who founded the city in 1156 AD. The yellow sandstone used throughout the architecture of both the fort and the town, imparts a golden hue when kissed by the sun.

Suryagarh Jaisalmer, is not just a hotel, it represents a unique way of life, carefully preserving the traditions of our past yet framing them in a modern idiom. The hotel takes the path less travelled and discovers with you, secrets of a land that have been long shrouded in myth and legend. With great consideration to your comfort, their hospitality is intuitive and genuine.

At Suryagarh it was love at first sight. The sandstone shone like gold and was visible even from a distance attracting my attention. The magnificent property, the beautiful architecture and warmth around bought me closer to home. Welcomed by “dhol nagara” traditional way of welcoming guests with trumpets sounding and music being played, we were taken inside the hotel. the soft sound of water, the smell of incense and a touch of sandalwood on our foreheads greeted us followed by a welcome drink, namkeen and mithai. 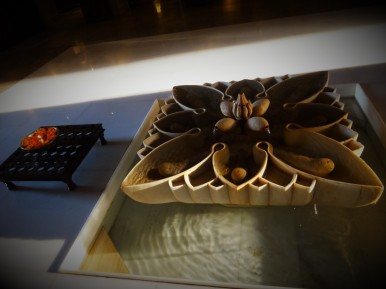 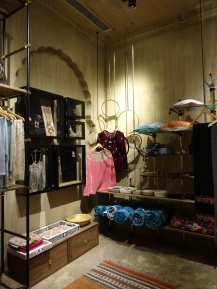 The boutique shop at the hotel 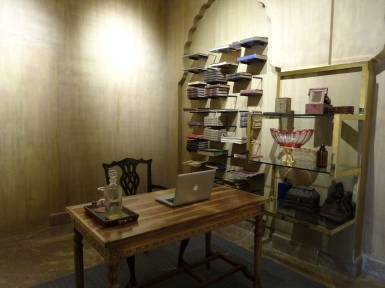 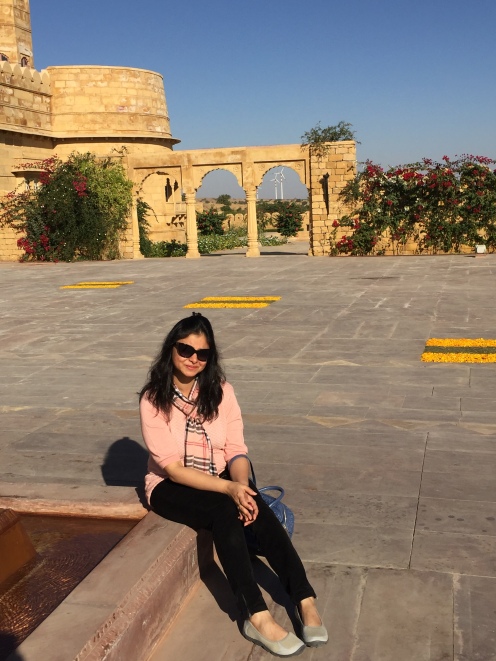 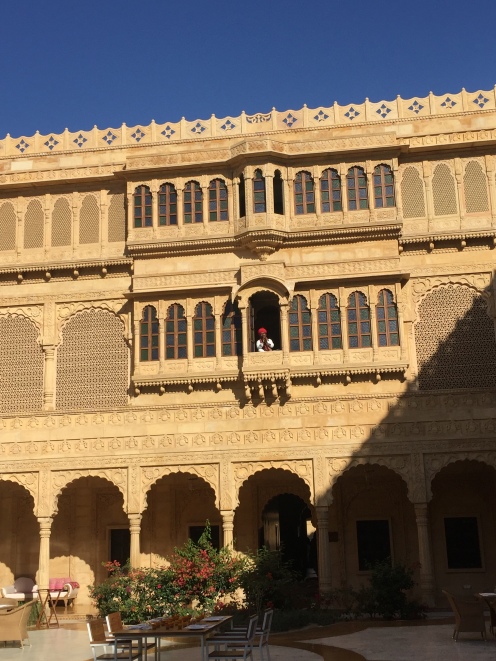 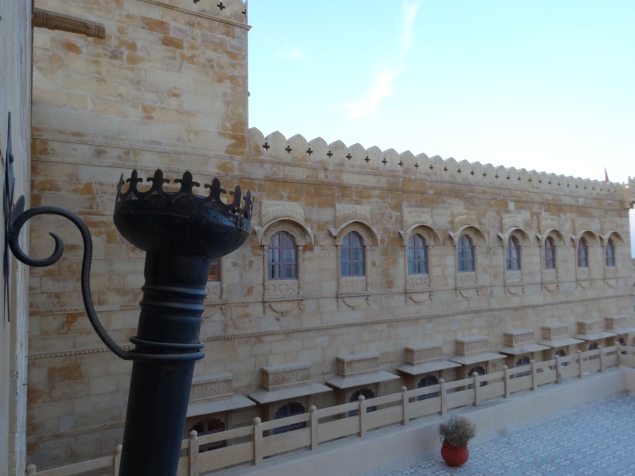 An outside view from the terrace 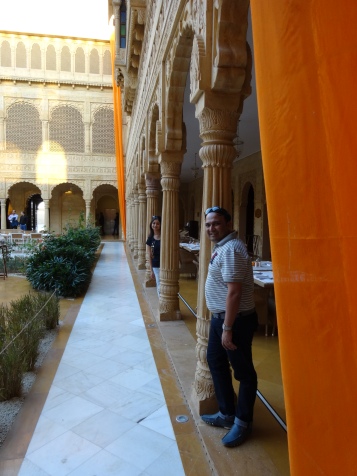 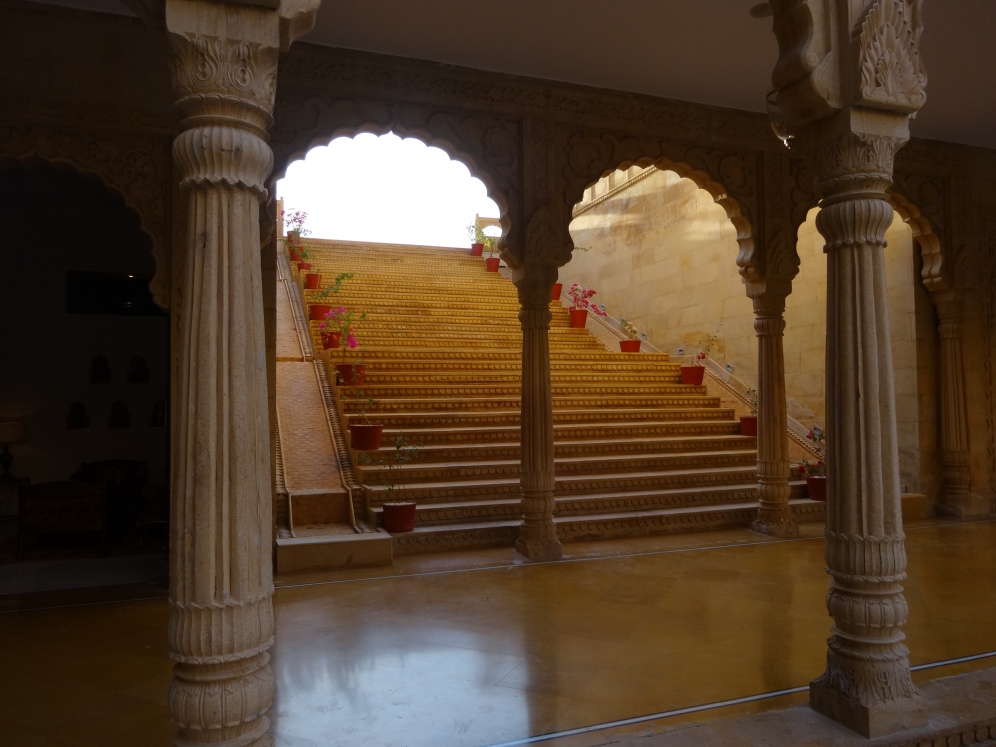 way to tulsi aangan,and mini zoo at the hotel

We were greeted in our room with complimentary Indian mithai (sweets) from the chief bawarchi (chef), wrapped in rose petals those sweets were delicious. Everything was very traditional about this place, and I was impressed by the quirky room tags kept in the room. That evening we were invited for a signature dinner in the hotel gardens accompanied by a singer singing live only for us. He welcomed us singing the traditional kesaria balam padharo mhare desh sitting on a nearby hill. We were made to sit on low lying mattresses carefully decorated along with blankets to keep us warm as the temperature began to fall. While we enjoyed our drinks and the beautiful sunset, the little candles lit all across the garden like stars gave us company. Now it was time for the highlight of the night. The signature thali enough of serving 10 stomachs, came with all its grandeur and pomp. It was carried by 4 people in Rajasthani attire, two women carrying torches in front, two chefs banging thali with belan (plates with rollers) announced its arrival. The head chef introduced us to our thali full of rajasthani flavours( kair,sangari,gatta) and felt us to soak into the experience. Like royals we had our meal, enjoyed the setting and the music and thanked the hotel staff for their hospitality. 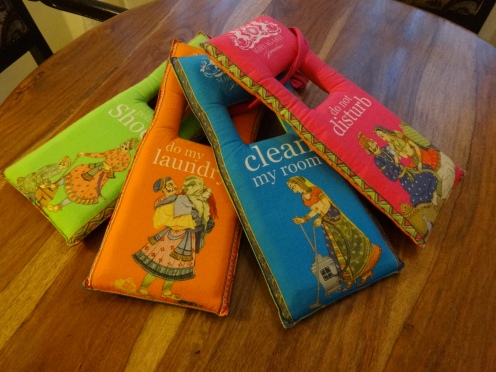 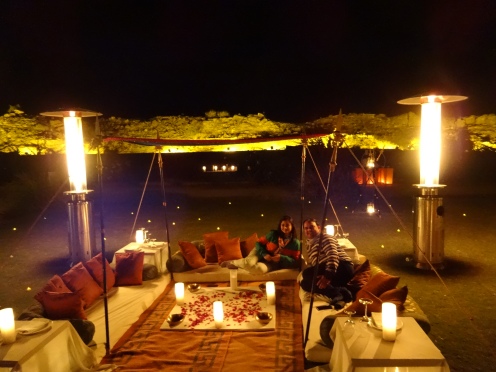 Enjoying the thar dinner under the stars

Next morning, we enjoyed a 60-minute massage at “The Rait“spa in the hotel. Now since it was our 10 the anniversary that day we were surprisingly wished by each staff we encountered. Breakfast was yummy with rajasthani delicacies in company of peacocks and a misrani(woman) singing morning raags (songs). After a quick breakfast we headed out to explore Jaisalmer. Did you know Jaisalmer fort is the only liveable fort in Rajasthan housing over 10000 people and around 20 % of Jaisalmer population. Both sides of the fort house shops selling local handicrafts and silver jewellery. 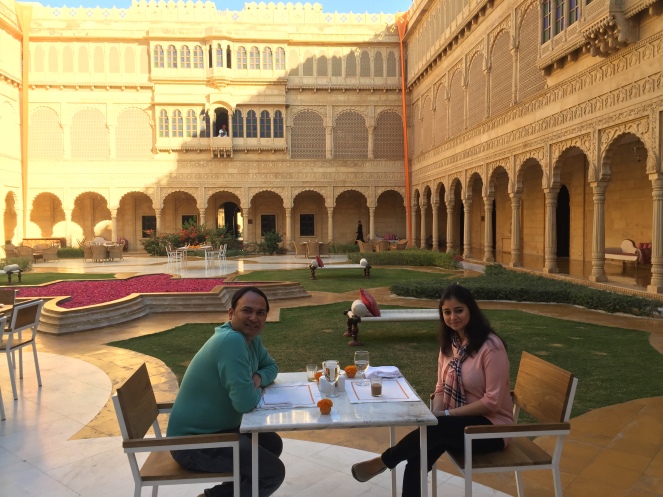 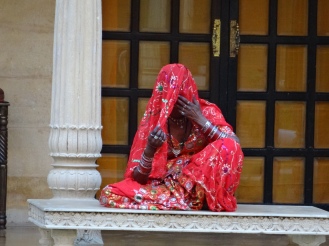 A lady sitting in the courtyard singing rajasthani folklore 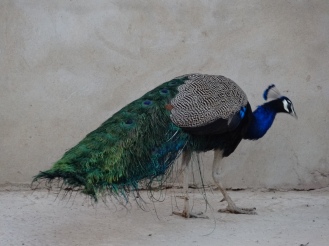 peacocks gave us company during breakfast 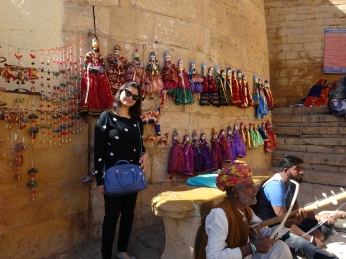 Puppets on sale at the Jaiselmer Fort ,locals singing songs 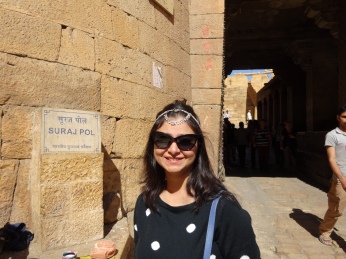 Wearing” Borla” a rak=jasthani head ornament . when in rajasthan do the rajasthanis 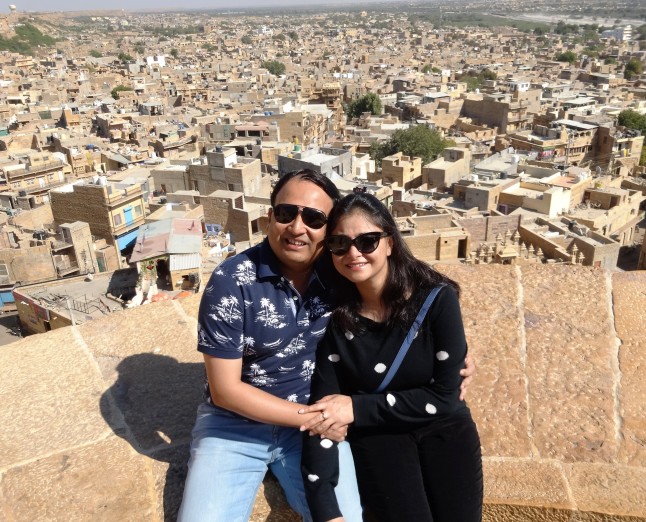 View of the golden city from the fort 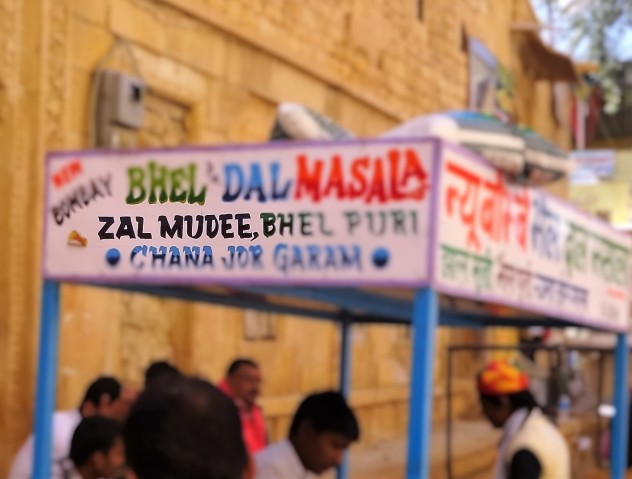 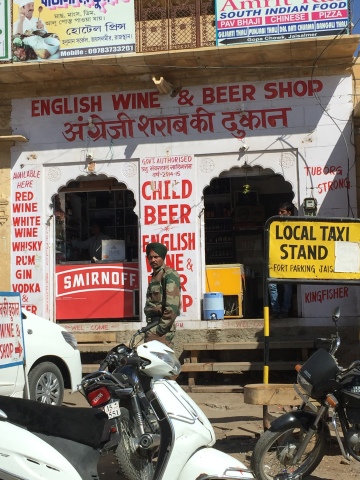 After lunch we went for silk route exploration tour going to the interiors of Jaisalmer, examining its history and touching its ruins. The Kuldhara, temple, sati monuments, left me pregnant with knowledge.  The deserted cursed village of Kuldhara, which was emptied in one night to protect the dignity of the sarpanch’s (head of the village) daughter. Such was the honesty and unity then. Khadeen irrigation was followed by farmers to grow crops on land. The Paliwals were smart to select land between mountains, where the water would collect during rains and help irrigation. At Kuldhara we saw a temple without an idol. All houses were made of stone and only stone and no cement, hence not effected any calamity. We saw numerous sati monuments. In was an old practice in India, when the wives burned themselves with their husbands on his death, these stone statues were made to remember and honour them. 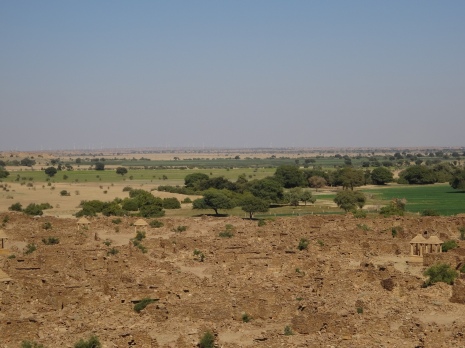 A deserted cursed village of Kuldhara 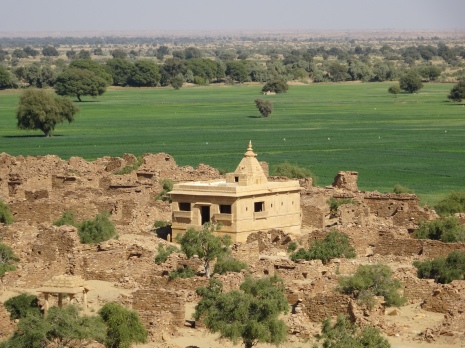 A stand alone temple with no idol , behind is the green patch of land developed on khadeen irrigation 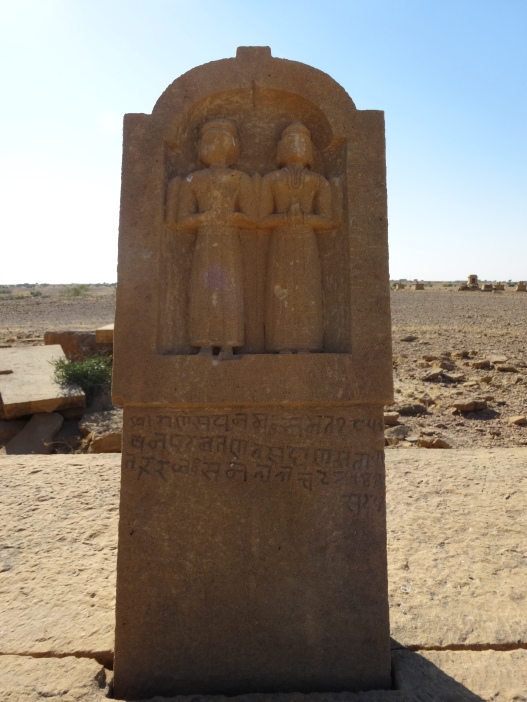 Sati monuments. two figures mean a couple , while 3 or 4 suggested the man with his many wives

Sunset was at the sam (dessert) amongst the sand dunes. Riding on camel backs we headed to the dunes not knowing was was awaiting us there. A passage was made with candle standing on both sides welcoming us. Rose water was sprinkled over us and a warm towel presented to sanitise and clean our hands off the sand. We were made comfortable on low lying mattresses in the middle of the dunes with a 15-member staff and chef at our disposal. They had set up a make shift kitchen to make sure we taste the food fresh and hot. A fire show was displayed ahead of us to keep us company. The glassed clinked as the sun went down, the marigolds used as decoration shone in the setting sun making it picture perfect. here we spent most of the evening, secluded from the rest of the world, no wireless connectivity, yet connected by hearts. 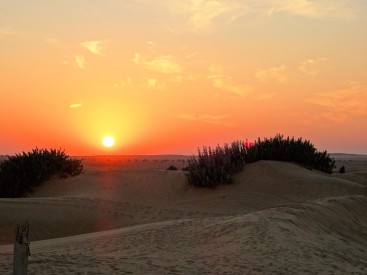 Sunset at the Sam dessert 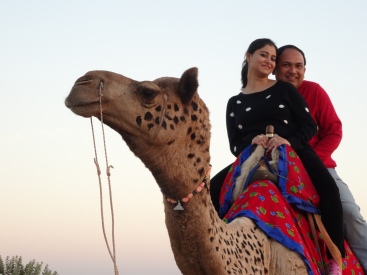 enjoying camel ride to the sam 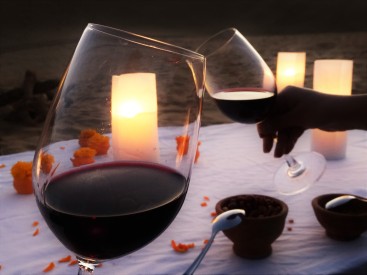 The glasses clinked as we marked our 10th wedding anniversary 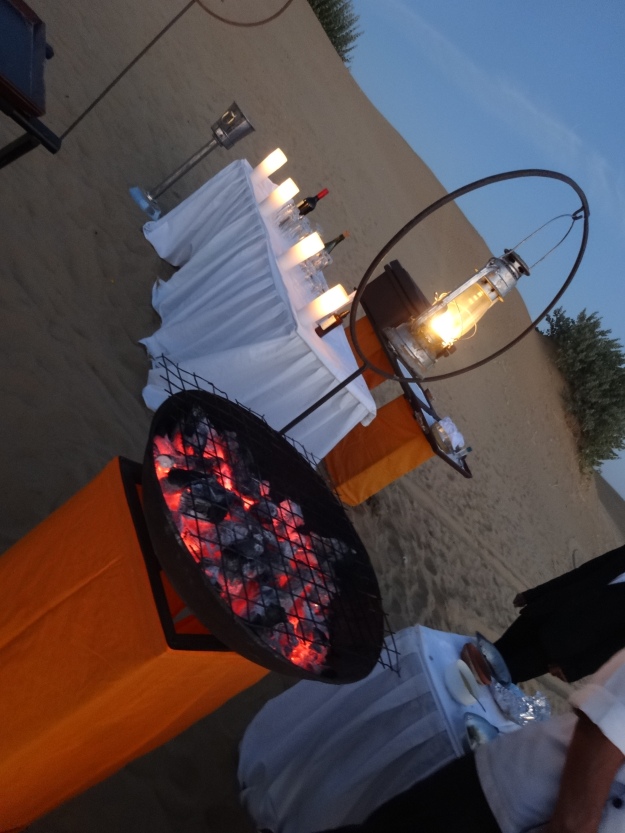 The fire show as it began to darken 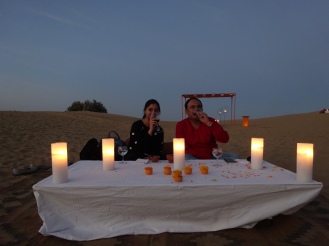 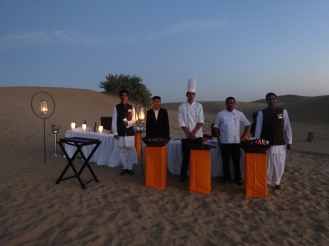 chef with his crew

After a soul satisfying dinner, we headed to our room only to find it decorated with rose petals and candles marking the end of our anniversary. A small cake with a hand written note was kept beside the bed too.

Given a chance I would love get married again at Suryagargh Jaisalme,ofcourse with the same man. I feel so happy sharing this with all here, because by writing this I am actually re-living the entire experience again fresh and alive. Thank you for this opportunity.

P.S: The war memorial and the thar museum are worth paying a visit too.