Melbourne rates highly in education, entertainment, health care, research and development, tourism and sport, making it the world’s most liveable city. Melbourne was originally a British settlement where prisoners and convicts where made to work.

Famous for its Great Ocean Road, food and wine Melbourne has it all The sun kissed day on the GOR was worth every second, it took 14 years to build and spreads over 243 kms. It was Built by returned soldiers during peace days and is dedicated to soldiers killed during World War 1. the road is the world’s largest war memorial. The scenic route along the coastline is beyond beautiful. The 12 Apostles served as the highlight of the tour (look at pics to know more). Chilled beer and heart melting lamingtons keep the spirits happy and high. 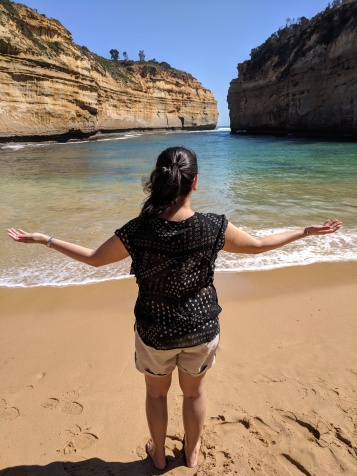 Behind me stands the two rocks named after Tom and Eva who were the only two survivors of a ship wreck Lochard.

The twelve apostles.12 limetone erruptions standing proud have a story to tell.shells and other sea life settled on the sea bed evenually forming the soft rock called lime stone which you see here today. wind, curent and hhg energy waves continue to carve these limestones which will eventually disappear. Hurry and see them asap before they are gone.

chiled beer and cool shades at the GOR Brewhouse

The water rich in minerals and the coast rich of gold. The largest sea swimming festival is held in Melbourne in January every year. There are over 600 varieties of eucalyptus trees found in Australia. The coast line suffered bush fires in the past, the effects of which are visible even today. Leaf less trees, black soil, and black lifeless trunks cover a major portion which resulted in the death of over a thousand Koalas.

Fishing and surfing are the main attractions. Did you know Australia has 2 flags? Where each stars represents a state or territory. Victoria another town in Australia boasts of largest dairy production in the island. The man-made lake park called the Albert park in the city of Port Philip near CBD was refreshing and comforting, while the  Kildabeach was relaxing and rejuvenating. The evening walk around the harbour was exciting and the food delicious. The fire rising from different pillars at time intervals is a sight not to be missed.

sails on the water , walk along the lake and giggles in the air

Fooling around before boarding the Tram Car Restaurant

On board the tram car , food on the go ,and wine on the flow.

The tram car restaurant experience was amazing. Good food, Champagne and altered talks made it an evening to remember. The Casino, clubs and bars mark the area and offer great night life choices. We watched two movies back to back and ended the day high on happiness at around 2am.

Rest you know the drill, follow description at the end of each picture to know more.
Happiness and sunshine